skip to main | skip to sidebar

So this blog pretty much sucks for 1st quarter 2010 (having just filed my tax returns) but I fully intend to fix that, starting tomorrow (so that I just can claim April fools and not write again until May, really).

I've been exceptionally busy at work, and cleaning up puppy poop, and trying not to let my A1c creep back up from the multiple pounds of chocolate I can't stop eating every week. Admittedly, I'm a lot better at World of Warcraft. I know, I know - shoot myself in the face. My twitter, facebook, blahblah, and other internet outlets have also petered out. That diabetes daily photo posting lasted about 3 days. So I'm going to pick back up here, first and foremost, concurrently with attempting to develop a regular workout routine. So I'll keep you posted on how that's going. I still haven't run any damn half marathons. I'm going to train Maisy to be my running partner. We went on two 3+mile runs that went pretty well, actually. About two weeks ago. So it's very much a work in progress.

I also am slowly building an arsenal of dinner recipes I can actually make besides Seebacher's Famous Marinara Sauce and pasta, and I can share the good ones if anyone's interested. I made one terrible awful potroast last week that was really, really bad, so I won't share that.

And just because these are horribly, horribly overdue (not to mention the fact that I haven't had time to take any decent pictures):
Everyone loves a Theme Party!! 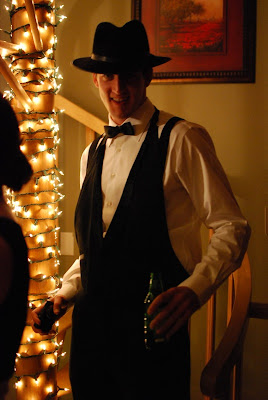 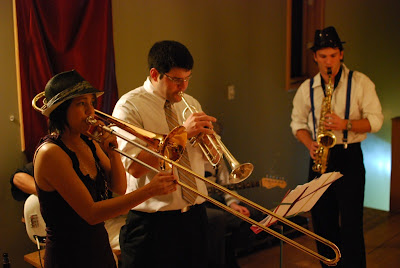 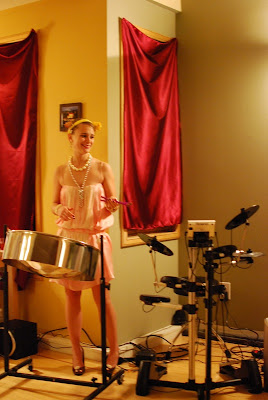 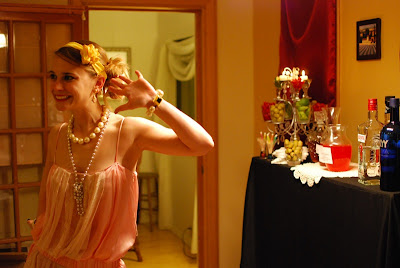 My dress and shoes were TO DIE FOR, unfortunately I am a total noob at the art of taking photos of oneself.

My first post in three freaking months may as well be a horrible one. Its too long for twitter...

So I'm walking through the main lobby at MIT, and I hear footprints that make me think of Gwen, and maybe she's sneaking up on me to jump on my back or something, but obviously Gwen isn't here, and I can't think of any small children who would know me in all of Greater Boston. So I think to myself "It must be a small asian lady in a hurry..."

Does that make me racist?

Incidentally, it WAS a tiny child. 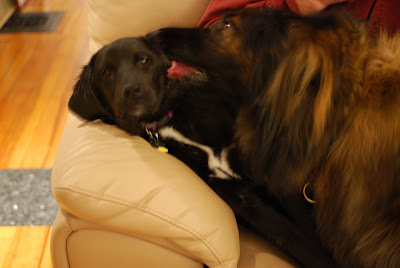 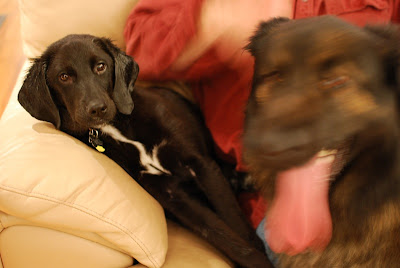 They had such a blast together, running, chasing, drooling, stealing food, etc. that Max was sad to leave after the Holidays were over. Probably for the better, since they're just impossible to leash at the same time and at one point Maisy did run away from him out into the street and got hit by a car...* She's completely fine, but now I know what it means to give a dog "fluids." The doctors take IV fluid and fill the scruff of the dog's neck with it, so the dog looks effectively like Qasimodo, and then feels like Jell-O when you pet her.

*In Maisy's defense, the idiot driver was doing 35. up a residential hill. on a dead end road.

I don't think I ever posted about this, but a couple months ago, Max (Remember? Big fuzzy guy? REAL big?) presented with a really aggressive type of skin cancer under his gums that looked like brains bubbling up behind his teeth. It was really creepy. At first we thought it might just be an infection from eating bones of roadkill, but alas... They surgically removed it a few times at the local vet, but it kept growing back. Why? Because its cancer and it does whatever the fuck it wants with no rhyme or reason. I hate cancer.

Earlier this week, Dad drove down to the Univ. of Wisco animal hospital where they admitted Mashmash and poked and probed and CT scanned him, and then removed the front part of his lower jaw, and 6 of his teeth. This was the preferred method of treatment, since chemo or radiation can have unexpected long term effects. This way, he may have trouble getting the food into his mouth, but he can still chew it once its in there (also, NO MORE CANCER). I mean, he was slobbery before, but now he physically cannot keep his tongue inside his mouth. Dad sent this picture yesterday when picking him up, "Max: the Shortened Version." It looks so silly, but he's still a happy dog, AND he'll make it to this Christmas, and hopefully several to come! 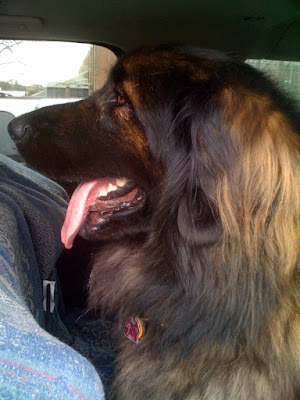 Moral of the story? Wear your sunscreen. And for the Love of God, don't ever get a dog. Too many bad things can happen.

My legs hurt from walking her so much. And stooping down to pull everything she tries to eat out of her mouth, including poop. And that's in addition to the 2+ miles I walk to and from the bus station every day to get to work and back, twice (to walk her on my lunch break).

And I'm tired from waking up in the middle of the night every night to let her out to pee.

And my god...the cute is just wholly overwhelming.

So, yeah. That's why I haven't been posting. Also Paulie is home, so I'm sorry world, you can wait.

Hi, My Name is Allie. 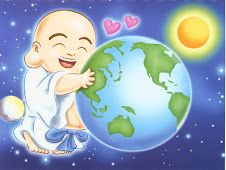